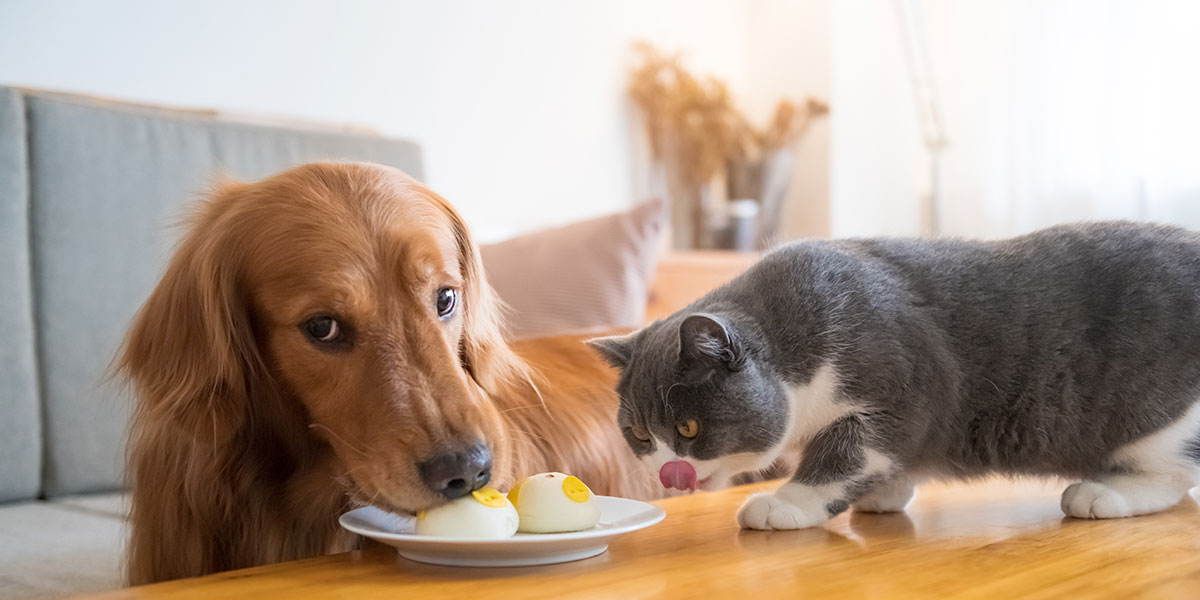 You may think that as long as your chemical cleaning supplies are hidden under the sink, your pets are largely safe. However, many seemingly harmless household items actually pose deadly threats to your furry ones. In light of March being National Pet Poison Prevention Month, we’re going to identify a few of those items.

​Avocado​
Avocados make their way onto many lists, but these articles rarely discuss the reason this fruit is dangerous to our pets. For cats and dogs, the avocado fruit itself is not harmful; the real danger is the possible ingestion of the large pit, a possible choking or intestinal obstruction hazard. In other animals such as birds, rabbits, guinea pigs, and certain farmyard animals such as cows, goats and horses, the danger is from a compound called persin. Persin is extremely toxic to these animals, causing respiratory distress, fluid around the heart and lungs, kidney and liver failure, and sudden death. In pet birds, persin toxicity will also cause the inability to perch.

Bread Dough
When ingested, unbaked bread dough will expand, ferment and release large amounts of carbon dioxide and alcohol into the bloodstream. This process will rapidly cause a bloated and twisted stomach (known as gastric-dilatation volvulus or GDV) and alcohol poisoning. If your pet is showing signs of bloat or GDV including an increased heart rate, distended abdomen and vomiting or non-productive retching, it is imperative to seek immediate intervention. As the fermentation produces alcohol, it is quickly absorbed into the bloodstream causing intoxication, dangerous blood pressure and body temperature decreases as well as respiratory failure and seizures.

Chocolate​
Many pet owners know the dangers of chocolate, but they don’t know the types or amounts of chocolate that pose the greatest threat. Chocolate contains theobromine, which is a methylxanthine compound very similar to caffeine. Darker chocolate has a higher concentration of theobromine with baker’s chocolate and baking cocoa posing the largest threats. Pet poison control hotlines report 95% of chocolate consumption-related emergency calls and veterinary visits are for dogs; small dogs often have to be treated for obstructions due to consuming the wrapper on a chocolate as well. Signs of methylxznthine poisoning include vomiting, diarrhea, hyperactivity, abnormal heart rhythm and seizures. If left untreated, progressive and severe symptoms can lead to death.

Grapes​
The cause of toxicity from grape, raisin, or currant ingestion is unknown; however, it is known that dogs, and possibly cats and ferrets, can suffer severe, acute kidney failure after eating any type and quantity of grape or product containing raisin. Unlike other foods, the toxicity of grapes does not appear to be dose-dependent; even miniscule amounts can be dangerous to some animals while others are not affected until consuming a considerably large dose. Veterinary care will include decontamination via induced vomiting or decreased absorption via activated charcoal administration, kidney function monitoring, and aggressive supportive care and intravenous fluid administration.

Tea Tree Oil​
Although it’s considered a natural wonder-drug for humans, tea tree oil should never be used on pets. Also known as melaleuca oil, it is sold in several concentrations with 100% oil resulting in severe poisoning with as little as seven drops and death after as little as 10 milliliters. Both cats and dogs show similar symptoms when exposed such as tremors, weakness, inability to walk or loss of balance, coma and death.

Liquid Potpourri​
Liquid potpourri or wax melts may seem like safe products for making your home smell good, but they can be quite harmful to your furry friends. The scent is often enticing enough for a curious pet to take a couple licks, and that is all it takes to cause severe chemical burns in the mouth, esophagus and stomach. A high enough dosage will also lead to difficulty breathing, tremors, vomiting, weakness and even organ damage.

Glues​
Commonly sold under the brand name Gorilla Glue, diisocyanate glues as well as other wood and construction glues, carry a large risk if ingested. Interaction between these glues and stomach acids will cause a chemical reaction, changing the glue into a rapidly expanding foam. The foam solidifies in the stomach and intestinal tract and requires surgery to remove the foreign body. Gastrointestinal distress symptoms caused by glue ingestion include vomiting, retching, drooling, distended stomach and loss of appetite. This is an emergency situation and requires immediate care.

Detergents​
Cats are most commonly affected by corrosive burns due to detergent exposure. This typically occurs because the cat may walk across spilled detergent, liquid or powder, that was not cleaned up immediately and then ingest it later while grooming. Symptoms of ingestion include visible burns on the paws or mouth, drooling, vomiting, lethargy and respiratory distress. Immediate veterinary attention is required as internal damage may be severe.

Nicotine​
Non-smokers brush this danger off commonly because it isn’t found in their homes. But if your pet is allowed outside at any time, it may encounter and consume dropped cigarette butts. Consumption of nicotine gums poses an increased danger to dogs since many brands are sweetened with xylitol, which is also toxic. Nicotine increases both heart rate and blood pressure. Consumption of a substantial amount can also cause neurological damage. Even if your pet vomits following consumption, it is safest to have a veterinary examination in case further decontamination, intravenous fluids or other medication is necessary to stabilize your pet.

Regardless of how well you attempt to avoid dangers for your pets, you still need to be prepared if something happens unexpectantly. Act quickly and appropriately during an emergency situation to increase the chances of your pet’s survival and return to good health. Create a pet first aid kit, list important phone numbers including animal poison control and your veterinary clinic, and respond quickly in the event of an emergency.