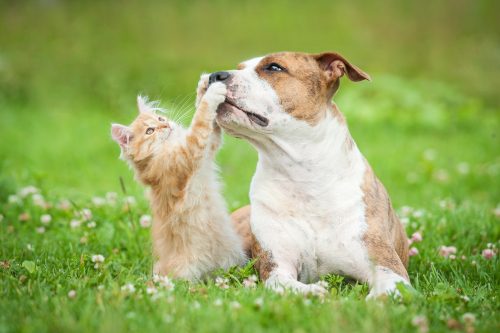 How does infection occur?
Mosquitos transmit heartworm disease by their bites. An infected animal has microfilaria within their bloodstream. When a mosquito bites an infected animal, it will ingest the microfilaria. These microfilariae mature over the course of two weeks into an “infective larvae stage” within the mosquito. When that mosquito bites the next animal for a blood meal, it transmits the larvae to the animal. Within 6 months, the larvae will mature into adult worms and survive 5 to 7 years in a dog and, if they reach maturity, 2 to 3 years in a cat. Female adult worms produce even more microfilaria that circulates in the bloodstream until they are picked during the next mosquito bloodmeal.

What are the usual signs of heartworm disease?
During the early stages, dogs often show few and vague signs. Over time, fatigue, a mild cough, lethargy, loss of appetite, weight loss, and disinterest in exercise or play are the most common concerns seen by owners. Later stages of the disease will typically result in a swollen belly, due to accumulating fluids. Dogs with large infestations may develop sudden blockages inside the heart called caval syndrome. Symptoms of cavel syndrome include sudden onset labored breathing, dark or bloody urine, or pale gums. The only treatment option for these cases is a surgical intervention but is considered very risky and may be unsuccessful.
Cats who have heartworm disease typically show either very subtle or very dramatic symptoms. Some cats have no outward signs of distress, while other cats have asthma-like attacks, difficulty walking, seizures or fainting spells. Sometimes, the first sign of distress is sudden collapse or death.

What tests and treatments will my veterinarian perform?
If your veterinarian or you see these symptoms in your pet, an antigen test for heartworm disease will be performed with some of your pet’s blood. If the screen comes back positive, a second test should be performed to confirm the diagnosis to rule out potential false positive results since the treatment protocol for heartworms is both expensive and complex.

Dog Treatment
In dogs that test positive for heartworms, staging and stabilization are the first steps in treatment. If staging reveals a severe infection, or if the dog already has underlying medical issues, it may take months of therapy before the dog is ready to begin actual treatment of the heartworms. At the time of diagnosis, activity will be strictly limited since any physical exertion will increase the rate at which the heartworms can cause internal damage.

Exercise limitations may cause your dog to suffer from boredom and eventually could even lead to depression. To avoid this, frequently interact with your dog in a loving and calm manner. Keep the crate near you in the house to help your dog feel less isolated, especially if you make a point of socializing with your dog as you perform day to day activities. New and long-lasting chew toys, if approved by your veterinarian, can also be a source of entertainment.

After staging and stabilization, treatment will consist of several steps that are dependent on the individual case. The American Heartworm Society has developed guidelines for treatment that are subject to the severity of infection and potential complications. Generally, dogs with early or no signs of heartworm disease have a higher rate of successful treatment.

Cat Treatment
Diagnosis for cats is slightly more complicated and usually requires a physical exam, blood work, and other blood tests, x-ray, and, in some cases, ultrasound. Though there is no approved drug therapy for cats, infections often resolve on their own, but not before causing irreparable damage. In mild cases, treatment consists of stabilization and management of presenting symptoms. Hospitalization may be recommended to provide therapy including antibiotics, IV fluids, medications to support heart and lung functions in more severe cases. As in dogs, some cases are only treatable by surgical removal of heartworms.

How do I protect my pet from getting heartworm disease?
In order to protect your pet, the preventative medication must be administered to both cats and dogs on a year-round basis. Although they are typically used to prevent the disease from happening in the first place, these same preventatives are also used to treat an initial infestation and guard against subsequent infections. Preventatives are available in an oral chew, topical gel, oral tablets, or 6-month injections (for dogs). During a dog’s treatment, a 6-month repeat test is necessary to ensure complete resolution. Previously infected dogs need to use life-long preventatives since repeat infection is possible. Some pet owners think skipping preventatives in the winter months is safe, but weather can be unpredictable and it’s easy to start the first dose in the spring on time allowing mosquito populations to build before remembering to treat their pet. Your veterinarian will work with you to find the best prevention for you and your pet ensuring the continued good health of your furry family members.